Triggers are things that set other things in motion. Most commonly when we think of triggers, we think of guns. We pull the trigger and release the bullet to destroy whatever is on its path. Someone else can pull it as well and unknowingly shoot you at your weakest spot and sadly others will knowingly aim directly at you, pull the trigger and shoot you over and over again.

One of the cognitive Therapies associated with recovery is knowing your triggers and avoiding them like the plague. When triggers appear in your life, which they always will; it is imperative to see it coming and do your best to dodge the bullet. I know, easier said than done because triggers can show up out of nowhere when you least expect them right when you think you are safe. 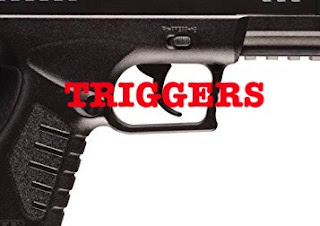 Ways to deflect the bullets that the triggers set in motion

Move out of the way! If you know that a person, place, thing or thought is a trigger steer clear!

Tell people who love, respect and care about your well-being what your triggers are so that they can help keep you out of harms way.

Bclieve in yourself and your power to overcome. The bullet only has the power you give it, do not pull the trigger and hope there is nothing on the chamber. Russian roulette has terrible odds! If it hurt you before chances are pretty good it will most certainly hurt you again.

Most importantly, if you are reading this there is a pretty good chance you have dodged your fair share of bullets, that is survival. The trigger was pulled, you faced the bullet and lived to tell the tale.

The source of all goodness in the world has a counterpart that is the source of all evil. Believe in the power of love to overcome fear which is what all evil feeds on and the bullets become fewer and farther between and one day maybe not so far away you can live in peace with yourself which is ultimately the only person who can save you from yourself.

Remove your finger from the trigger put the weapon down and be safe, you got this!

Posted by Kristyn Manemeit at 7:06 PM