To surrender, or not to surrender
that
is the question

Surrender can be seen as a positive or a negative;
no matter how you perceive it, there is always a change that comes along with it.

Sitting in class a couple years ago there was a basket with a bunch of slips of paper with one word on each. I didn't know what the basket was for; however, I am always looking for Divine intervention  so I took a slip. At this time in my life the word 'surrender' wasn't even part of my vocabulary and there it was . I was fighting the fight every single day for one reason of another. I thought, well that was a mistake.....that was most certainly someone else's word, I'm no quitter. The owner of the basket came around and asked everyone to take a slip without looking. I did this swirling the papers around in my hand to ensure a different message.... yup, you guessed it, the same damn word.

I have always identified the word surrender as being to give up, inevitably by waving the cliché white flag to let the attacker know you have no more fight in you and you submit.

When 'surrender' came up again, I looked it up and sure enough it meant exactly what I thought; so what was the message? I thought about it and came to the conclusion that the message was that  for me to heal all that was troubling me for so long I would have to do exactly what the tiny slip of paper insisted I do.

I decided I had nothing to lose and as hard and scary as it was, I gave up what was holding me back, I gave up my fear of the unknown, I gave up my attachment to a way of life that did not bring me joy, I gave up the hurt, the sorrow, the sadness, the unworthiness and I took a leap of faith that if I truly surrendered to my higher power and let go of all the pain; there would be room in my soul for the inner peace that had eluded me for so long.

Those who know me well may find that a little hard to believe as I was pretty good at 'putting on the survivor face'. What I know is there is a huge difference between surviving and living. I had to give up surviving and surrender to living. Go figure...….

I chose to surrender to life, sounds like an oxymoron but it is 100% true and now almost 49 years later I am no longer surviving, I am living and you can too!

The old adage "what doesn't kill you makes you stronger" is also true, surrender to what kills you. Draw strength from the power that hides behind fear; release the fear, release its power over you, let it go and LIVE!!! please :) 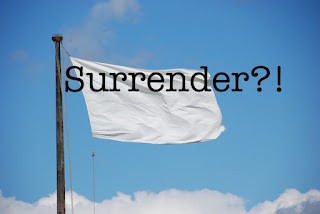 
Posted by Kristyn Manemeit at 6:40 PM