Bert was sent home with a prescription for 32 Hydrocodone after a tonsillectomy a few weeks back! I was shocked and pretty upset, to say the least. I arrived at the checkout counter to pick up what I assumed was an order for a few to get through the first couple of days if he needed them and received enough for continuous dosing every four hours for five days. Never was Bert asked if he had a family history of addiction. Never was Bert instructed in the proper use of opioids other than a brief disclosure by the dicharge nurse at the hospital (when he was still loopy from the anesthesia) that said 'don't become a statistic'. Never was he told how and when to take them other than 1 pill as needed every 4 hours for pain. Bert was told he could also piggy back the tylenol and ibuprofen however those could upset his stomach so be sure to eat...

Bert was also not told to limit the opioid use to only when truly necessary for extreme pain or if he took it regularly the side effects associated with the drug. He wasn't told how this too could upset his stomach, or how it could cause constipation or how if he took it as prescibed he could blow through those 32 pills in 5 days which has been PROVEN scientifically to be long enough to cause a dependance and withdrawal symptoms. He wasn't told how terrible that withdrawal could be; flu like symptoms, aches, pains, headaches, vomiting, diarrhea, anxiety... the list goes on.

No one wants to be in pain and no one wants to see their child in pain and it would have been super easy to hand over the bottle to Bert and say take as needed, you're an adult now; if the doctor prescribed them it must be safe. NOT TRUE! 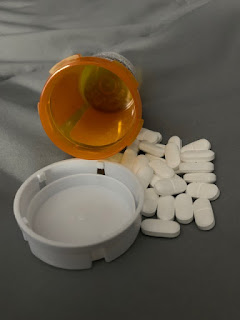 Full disclosure: I do not beleive the doctor acted intentionally neglegent, the dose Bert received was a low dose, there were no refills and the type of drug has less of an addictive nature than other opioid drugs on the market. However, that said, I do beleive for parents that have never experienced the opioid abuse/addiction epidemic first hand, this rx is A RECIPE FOR DISASTER!!!

How Bert and I managed his pain

First course of action was pain reliever and antiinflammatory pain reliever; Tylenol* and Advil*. Both meds, staggered, worked well to control his pain. Nights were the worst so he took 1 hydrocodone before bed and when he woke up in the middle of the night, it was ibuprofen and then back to Tylenol in the morning. Suffice it to say Bert was in a decent amount of pain, but he had his tonsils out...we knew it was going to be terrible... track a few days forward, the pain, worsening and at its peak he was able to manage; although uncomfortably, eventually making it through the recovery process having used over the counter pain relievers, ice and patience. He ended up using 4 of the 32 hydrocodone he was prescribed with little to no side effects.

Do the math, 28 pills leftover is 28 too many...let alone the high cost of meds that are now wasted and being destroyed.

I shared this with Hillary and she was beyond disgusted. How is it in today's world with the opioid abuse/addiction epidemic being at a world wide high can these prescriptions still be written. There are on call doctors, 24 hour pharmacies and a modern world where there are plenty of ways to get more in an emergency if it is absolutely necessary.

Please take heed when opioids are prescribed, ask questions.
WHO~WHAT~WHERE~WHEN~WHY~HOW it could lead to a matter of life or death and at a minimum a life that is changed forever by a drug...….

As always, I offer you love and compassion for the never-ending always changing journey!

Posted by Kristyn Manemeit at 9:08 AM