A gift from Ben (Sean/Old Man)

Everyone deals with the loss of a love in different ways. When Ben passed Hillary thought about the idea of dating to try to fill the huge void that was left by Ben's passing. We talked about it and she realized that simply wasn't possible, no one could ever replace Ben and she needed time to heal before someone could ever enter her heart.

After a while Hillary came to me and said she had been talking to someone who she thought was special. I was NOT ready for that at all. I worried about her and her fragility, I worried about the boys. I told her I understood however I did not want him at the house, that I didn't think it was a good idea.

What happened next I knew was a game changer. Hillary told me Sean's birthday was the same day that Ben left this life. She then told me his mom's name was also Kim, he had two nephews that he was very close to that were the same ages as Cam and Lin, he was a huge Giants  fan and that he didn't drink or do drugs, never had.

This made me stop and think, could it be possible that Ben had chosen him, and when I talked to Hillary about that possibility she said that she had been talking to Ben and had asked him for someone to simply spend time with, someone to do fun things with the boys and magically Sean appeared.

Still not convinced, Annie called me and said 'he' was at the house and she knew I would not be happy. I got home from work, walked around the back of the house and was not prepared for what I saw.

Sean (Old Man as Cameron nicknamed him; still not sure exactly why) was helping Hillary build a shed. When he looked up my heart skipped a beat, I saw Ben.......for a split second Ben was there in this person. Startled I introduced myself and walked in the house.

Sean resembles Ben in very slight ways however there is absolutely no doubt in my mind that Ben brought this incredible man into all of our lives.

When Kim (Ben's mom) met him for the first time, she too felt a presence and has welcomed him into her family.

Ben picked the best possible person to be with Hillary and the boys and here is how I know. 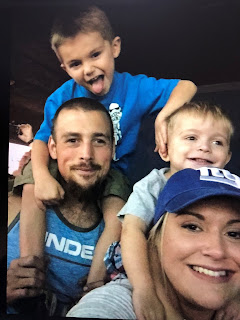 Sean loves Hillary and the boys and is generous with his time and treasures.
Sean is kind and funny
Sean makes Hillary and the boys laugh (how great is that)
Sean is playful (he is a big kid himself)
Sean has a gentle soul (necessary for helping to raise two young men)
Here's the deal closer: Sean is not threatened by the memory of Ben. Ben's shoes are some pretty big shoes to fill and he does not need to fill them. He is very simply stated, Sean, and that is all he has to be. He spends time with our family and friends, Ben's family and Ben and Hillary's friends and he does it with grace. Never misses a step.

We all love Sean for who he is and what he has become for Hillary and the boys.

They are safe in his care and that is no accident. Ben's spirit was most definitely involved in this (not by chance) meeting. This was intentional in every sense of the word.

Yesterday I remembered the day Ben passed with sadness for the loss and joy for the love that remains.

Today I celebrate the life that is part of ours and gives us reason to celebrate a day that otherwise would have been left to mostly bring sorrow.

You can't make this stuff up, Ben's spirit is just as powerful from beyond as it was in the physical realm.

love and light be with you always
k

Posted by Kristyn Manemeit at 7:29 AM